The street of the farmers 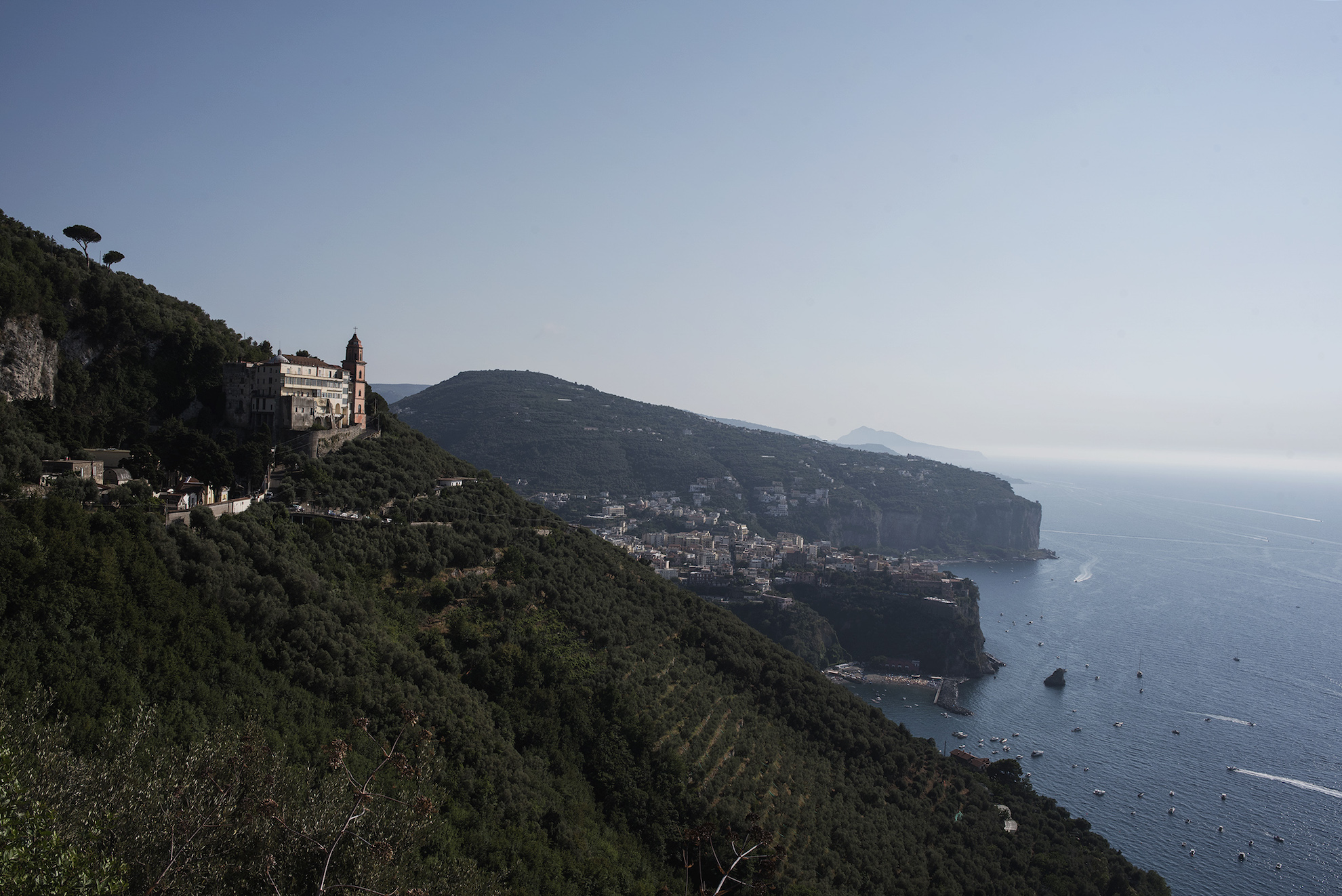 While we drive from Sorrento towards Vico Equense, we may see a red church, latched on the hill, half-hidden by the trees. It’s the church of Santa Maria a Chieia, close to the famous convent of San Francesco.

The Church is located in San Salvatore, one of the thirteen highest villages of Vico Equense. «Its bell tower, which opens onto a fabulous panorama, was even used as a lighthouse in the early 1900s», says Luca Coppola, local hiking and environmental guide and expert of the ample area around Vico Equense. Here is the starting point of one of the oldest paths of the entire Sorrento Peninsula.

Today we call it “Path of Sperlonga”, but it was a tract of the ultramillennial Via Athena, dating back to the presence of the Greeks in the Gulf of Naples. This road reached Punta Campanella, the extreme point of the Sorrento Peninsula, that in the past we called Capo Atheneo, where the Greeks built a temple dedicated to the goddess Athena, renamed Minerva by the Romans. 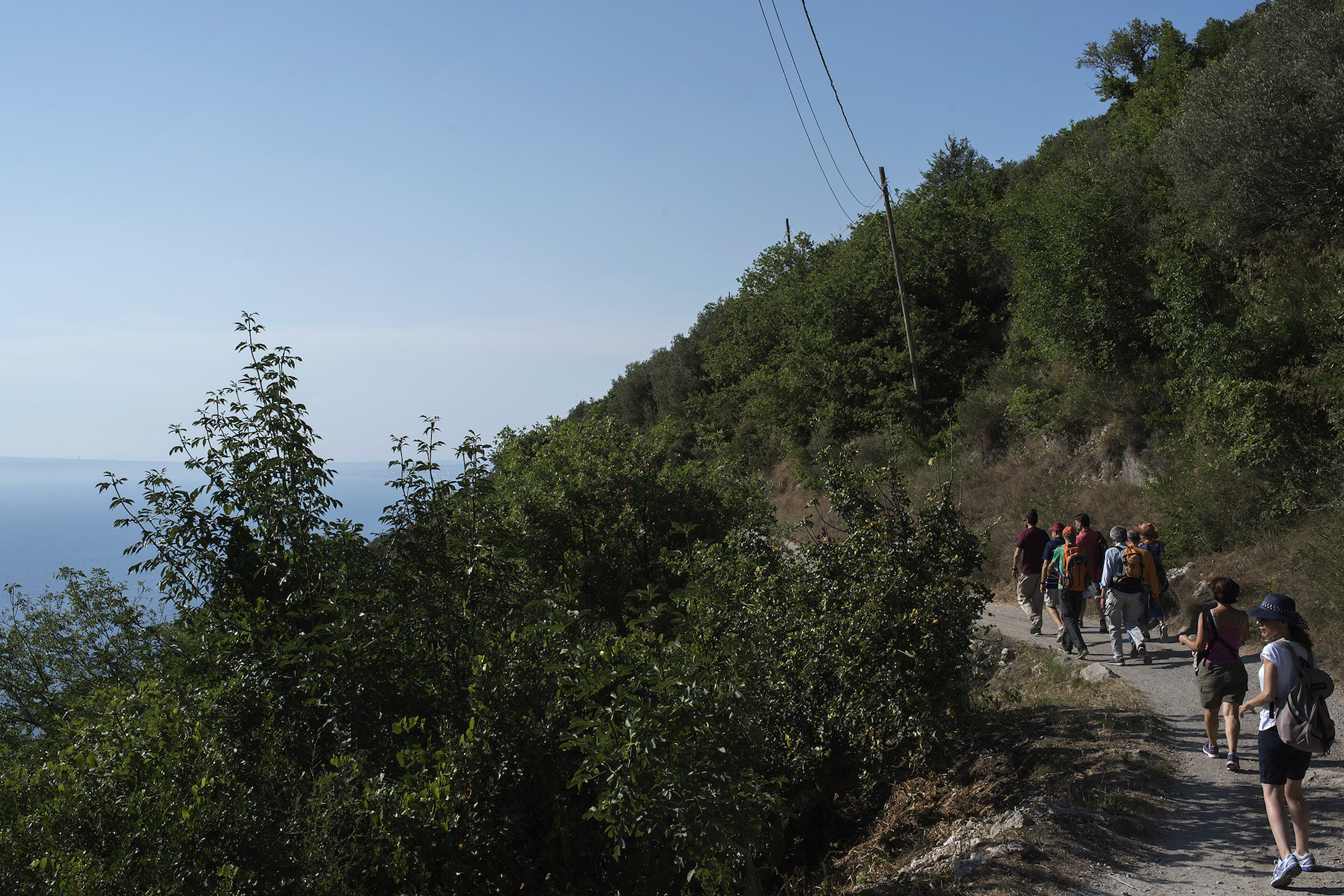 The name “Sperlonga” derives from the latin word “Spelunga” (cave): nature dug several cavities used in the past by shepherds as a shelter for their animals. “Locals continue to use them today”, Luca tells us. «These caves are the result of karstism: rainwater alters limestone reliefs and erodes numerous portions of them, creating a landscape rich in particular shapes». A phenomenon that has also drawn a terrifying mask on the rocky wall that guards the path. 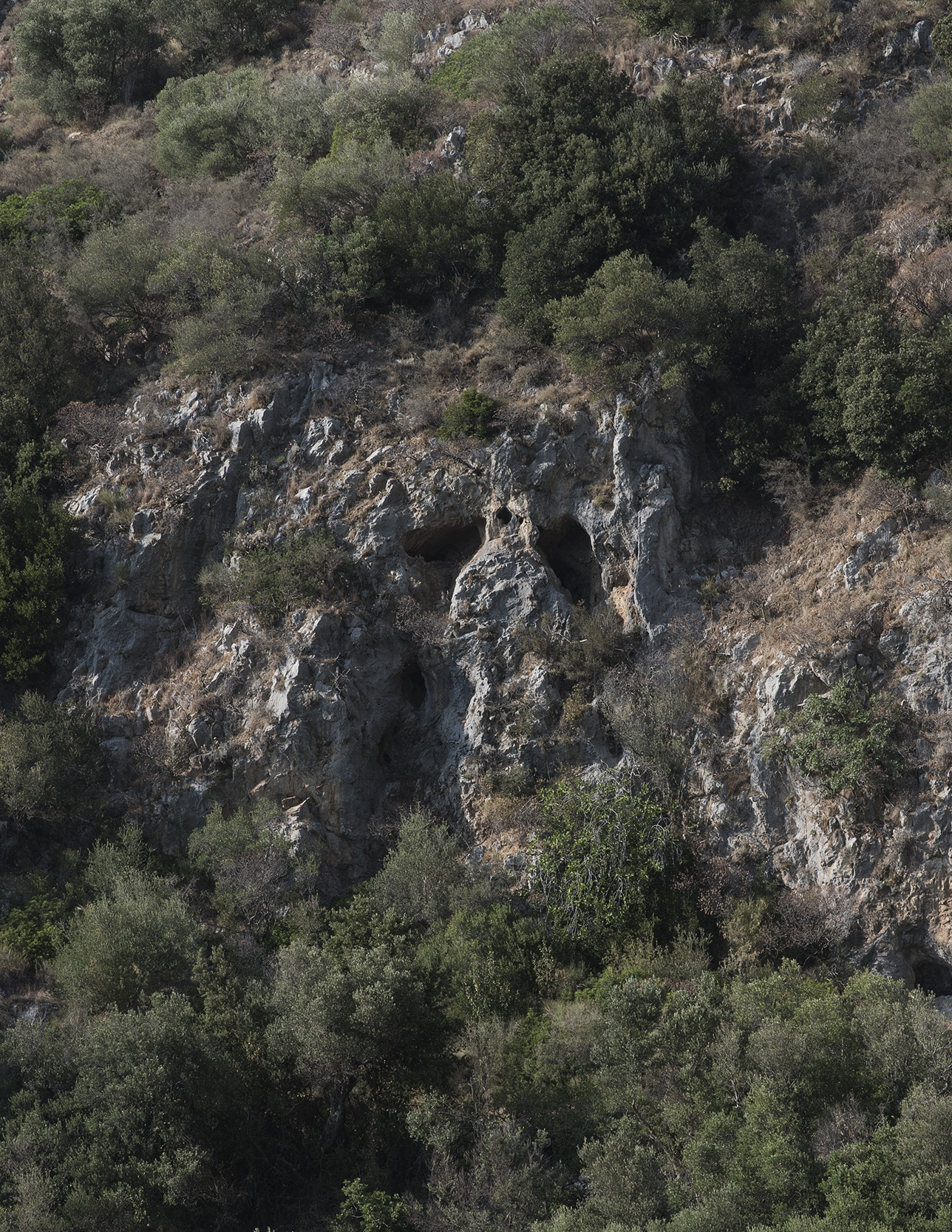 A "walker" on the path | Ph. Anna Monaco 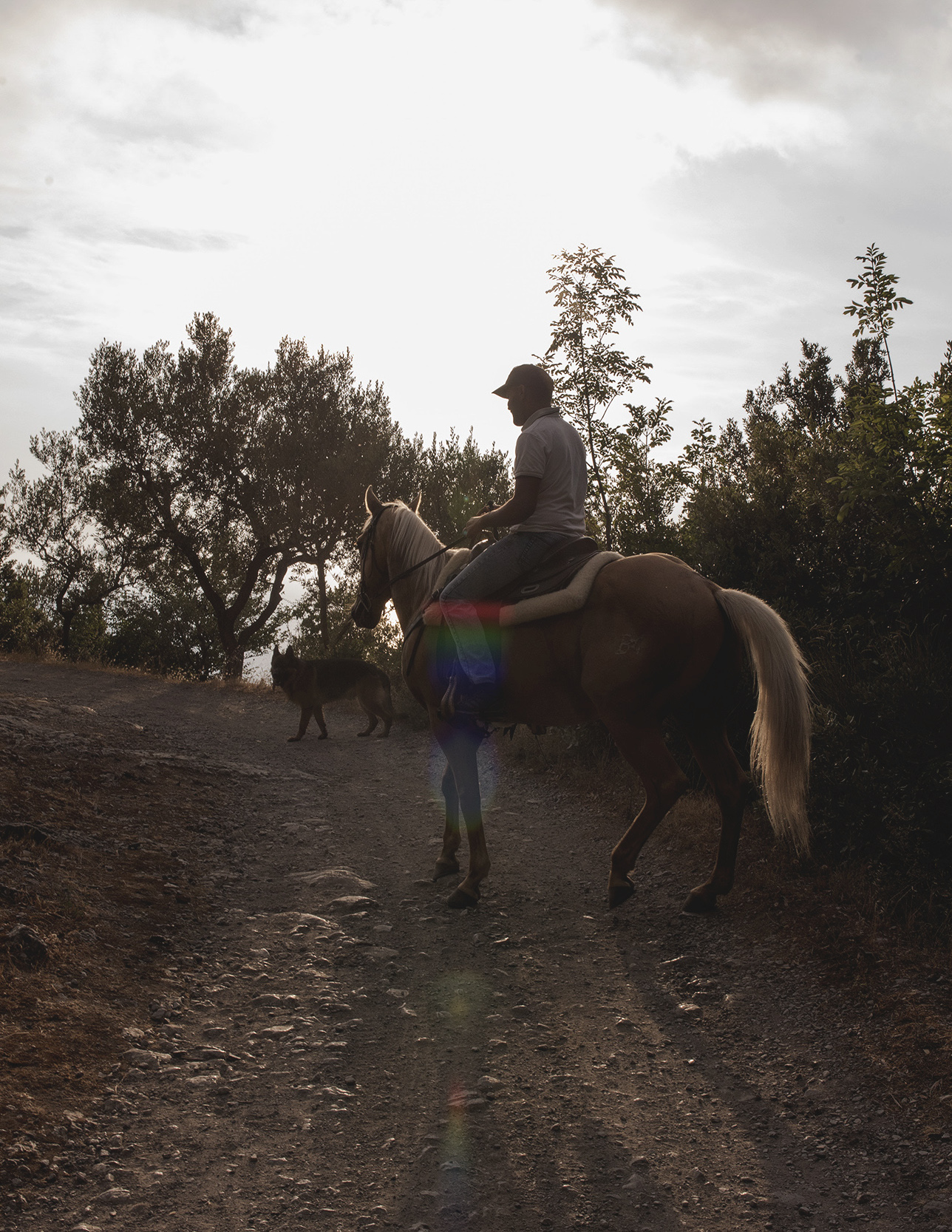 The Sperlonga is a long and winding passageway overlooking the sea, where you may breathe the scents of the Mediterranean vegetation: olive trees, rosemary, juniper, myrtle, wild orchids and endemic plants such as Santolina Neapolitana. This mule track was the only link between the ancient Roman city of Stabiae and the Sorrento Peninsula. From here it is possible to see to the east the city of Castellammare di Stabia and to the west the heart of Vico Equense. The island of Capri peeps behind the first tract of the coast.

An agricultural path alternates with this “natural terrace”, skirting vegetable gardens and farmhouses. Here the passers-by are not the hikers, as it happens in the most frequented treks, but the peasants and wood-cutters.

Along the way we refresh ourselves with spring water just as pilgrims and travelers used for centuries. Historical information traces its use back to the 1500s, when mills were fed for millstones. «Entire neighboring villages – says Luca – used the Sperlonga source to support families and animals. The old water carriers remember the long rows to fill the amphorae carried on their shoulder. Only the luckiest ones used mules». These farmers had to wait for the 1950s to have a water system that brought water directly to their homes. 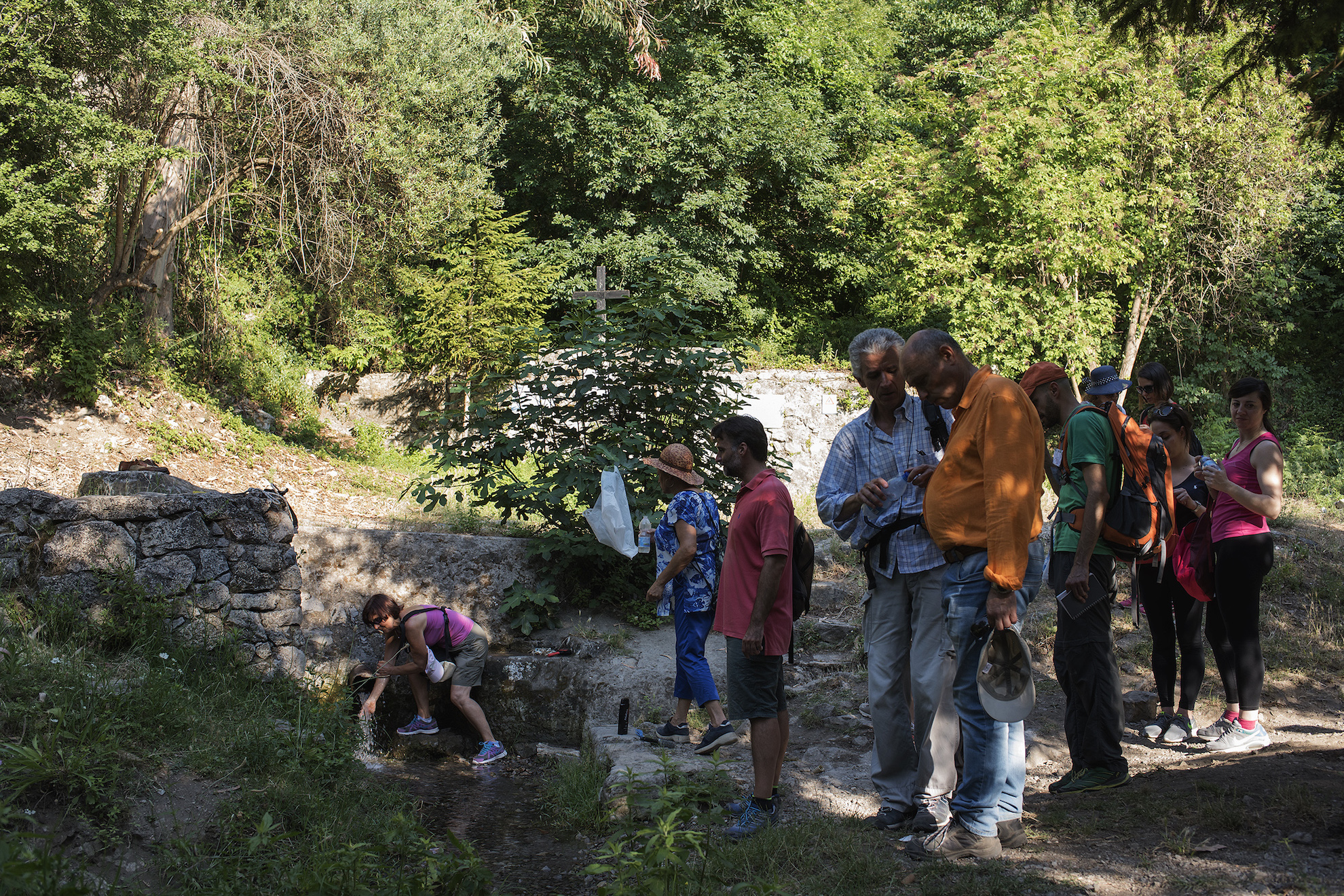 There are no historical artifacts describing the time lived on the path, except for drinking troughs and a gabelle, a structure in which the duty on goods such as oil, wine, cheese and other rural products was paid. All excellences of which the Sorrento Peninsula is still proud. Nature is the only witness of the many souls that have traveled this road over the centuries. Even the Vesuvius, which looks at us from afar, is younger than Sperlonga.

Here the time is marked by the flight of the peregrine falcon that nests along the limestone cliffs, from the tangle of juicy olives that crowd the branches of wild olive trees, from the eternal waves of a silent sea and from an intense rural life that respects the rhythms of nature.